Merry Christmas my Tender Lumplings.
Posted by LMB at 1:22 PM 3 comments: Links to this post

They Call Him Wiggins. 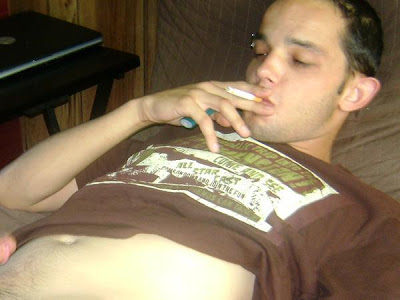 His half-naked, pale torso turned in the flickering cathode rays to switch the channels to view the various porn selections. The random grunts and slurps and groans of the movies filled the three by four video booth that we crammed ourselves into with sounds of random broken passions. I kneeled in front of him. Quivering in silent insect lust. His white hairless body blue from the video, towered above me, I glanced up at his angelic face. Khaki pants down around his knees, white shirt unbuttoned. Though he was twenty one, he had the slender athletic body of a sixteen year old. The personality also, unfortunately. Screechy and impudent. But, so hot. Classic Aryan facial features, he was the type that literary fags would write poems about..."Oh, thou doe eyed pouty-liped Grecian lad..." Except for those fucking ears that stuck out like two radar dishes, but it added to his cuteness, I digress.
So, like I said, I was kneeling like I was in confession preparing for the Second Coming with his seven incher sticking straight out erect and perfect with a little pearl of lubricant forming at the tip and I dove in for the attack. I sucked that pecker like my life depended on it and he got the bestest of the mostest I tell you, brother. The kid's finger kept flicking the dial and the channels switched faster and faster and I pumped and sucked and slid up and down and his knees buckled as his eyes glazed over with that dreamy look and a with a faint groan hot spurts of semen splashed down into my throat. As I wiped sweat from my brow, he collapsed onto the bench adjacent to the semen stained screen, his cock still hard and glistening. We went two more times around before that boy went limp.
Outside, we walked in the cold wind towards downtown Hell Pisso and smoked Lucky Strikes and joked and he screeched and yelled and jumped like a sixteen year old. Real fun cat, you dig. If yer into that thing, right? He wants to join the Job Corps, he says and become an upstanding citizen. What the fuck is that, I ask? He don't know. We cut into Bobo's China and chomp down on some Chinese buffet cuisine and he hits on the fifty year old Chinese woman that owns the place. Horny kid. Fuck anything. She giggles and teaches him some basic chink and he says he gets hot and I just roll my eyes and slurp my noodles. Pay the bill and cut.
We stroll through centro and I stare at him as he stares at all the chicks with their perky titties all pointing north with asses so fine. It turns me on to watch him cruise them girls, boys. "I got game." He keeps telling me. "My friend Chris, he don't got no game with girls. But, me, I got game." Strutting like a rooster for the girls that look back and giggle and I feel good walking with this stud. Whatchawannado comes up so we hit Juarez for kicks and since the funds are low we go to the Virgin Guadalupe festival at the Cathedral that my tranny friend Abel informed us about.
Cross the frontera and down the main drag, no don't want no taxi. Walked about and digged the scene. Fat whores, fat and nasty, smile with silver teeth under buzzing neon, fags giggle at us like devil fairies (The True Night's Heroes) as they stroll by, Aztec warriors dance the dance of ghosts and the cry of the Vatos fill the air. Girls eye the brown haired gringo that I'm with and he smiles back, he is really digging the scene. He goes ape shit over some broads big and shapely ass in some green jeans, she got the hint, but she ain't playing. After the fireworks, he complains of stomach cramps and I escort him back to the International Bridge. Stopping in a public pissoir he informs me that blood is spilling out fore and aft. Produces a blood soaked napkin as proof. Woah. We hurry across through customs and my white angel is looking pastier than usual. Coughing and holding his stomach, heartbeating a mile a minute. An ambulance is called and amid swirling red lights and choking yellow dust he is whisked away.
Goodbye, William Wiggins. It was fun.
Posted by LMB at 4:19 PM 5 comments: Links to this post

We are here because of you. 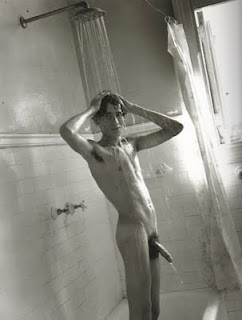 This morning, it was more of the same. No room at Vinnies. I told Tony that we needed to go and apply for food stamps and sell them so we would have money for rent tonight. Since our social security numbers were different, we had to apply at two different offices. After that long wait, I was accepted but the food card would not kick in until two more days. I met Tony back at the shelter for dinner around 5:30 and explained to him what happened. He advised me that he didn’t even go, that instead he had stolen a bucket and went around washing cars for a few dollars.
Okay, I blinked.
Luckily he did make enough for that nights rent. Eleven dollars. This old black guy named Carl shared some weed with us and we stood in a soup line down on 13th and Island Ave. The filth of the world. This fat drunk Mexican was intimidating a white guy ahead of me, the timid asshole didn't even fight back. El Macho turned on me, I picked up a brick and said I'll knock the muthuh fuck oucha and his tune change quick. He tried to save face and wanted to shake hands I told the puto to go fuck himself. We were degenerating into animals among the yellow bonfires and screams of phantoms in rags and junkies quivering in someone else's over coats. Shiny over the dirt. Cut.
Jump that fucking train to Mexico quick. Tired and dirty. Clik-clak-clik-clak.
I decided to take up my friend Chuey’s invitation and stay in an extra room in his brother’s house up in the old colonias. The room was small and consisted of nothing more than a couch, in which I slept on. Tony got the floor. The house was without running water so a hot shower or any type of shower was out of the question. The night was filled with bitter sadness. As Tony snored on the ratty carpeted floor wrapped in a old Mexican blanket, I stood out in the cold under fierce stars and smoked my last Lucky Strike. Thinking. A year ago. Where was I? What have I been doing? Why do I continue to live like this? Reaching in my pocket I pulled out a five peso coin walked to the corner cafe Internet, kids stand spitting on the sidewalk under naked bulb, and jotted this for the fuck of it.
Times up, senor. Good night.
Posted by LMB at 12:26 AM 1 comment: Links to this post

Cry of the vatos.

Blech.
After settling in, I showed Tony the sights in Tijuana. We visited some of the bars I hung out at, got drunk, and in El Ranchero I talked with some old friends. Again, the whispers were that I was in jail, another was that I was dead from AIDS. Why is it when I disappear I always hafta be dead from AIDS? Gossipy queers. Well, Tony and I and a few friends got pretty ripped and partied in the Red Zone. Nothing like dancing the night away with skanky heroin addicted trannies. Anyway, the worst thing that happened was that Tony and I were coming out of Bar Kin-Kle and we were rolled by the motherfucking cops! They took all our money! All of it! The only cash we had was about thirty dollars that was left back at the hotel room. Black winds of darkness were blowing I tell you, Dear Reader.
Tony and I were so upset that that night in our rented room, we made so much noise fucking the next day the Landlord kept looking at us with evil glances and sour looks as we used the sink and shower in the hall.
We crossed the frontera and arrived early at St. Vincent’s but even though we were sixth and seventh in line, there still weren’t any beds available. Though we were pissed off, we spent the day digging San Diego. I showed Tony Balboa Park and The Gaslamp District and we walked around Hillcrest. We met this one hip black guy and he gave us some coke. Snort! Wheeee! That was nice of him. Last night we enjoyed ourselves in our room in Tijuana. But, I informed Tony that it was the last night. I had no more money.
I had no idea what I was going to do. The most savage and bitter thing was that I had no where to store my black footlocker that had all my personal stuff in. I had packed my footlocker with all my personal books, writing, photos, CD's, and DVD collection before I left Juarez City and hauled it along. At the Greyhound, they would hold it only for two days, after that they would charge me for storage or throw it away. In a fit of panic, I was forced to keep only my photo album and a couple of journals in my backpack, the rest I resigned to let go. Tony convinced me to sell my CD and DVD collection at a pawnshop and that cash gave us food and rent and some weed for the night. In that little room, on that squeaky bed, I snapped. I began to sob uncontrollably. I realized I had just lost all the things dear to me.
Things look pretty bleak. I went downstairs and next to the laundromat in Hotel Colisio is a dinky Cafe Internet and I spent twenty pesos just to type this out and gotta cut short. Tomorrow will try to secure a place in Vinnies again, if not. If not....shit.
Posted by LMB at 11:24 PM 1 comment: Links to this post

It is Necessary to Travel

The More You Ignore Me, The Closer I'll Get.