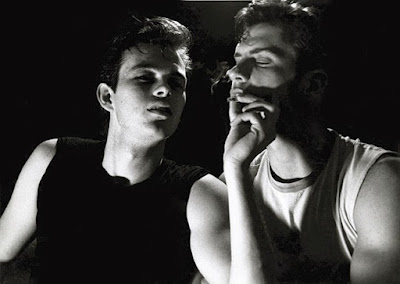 I briskly walked down calle Insurgentes towards centro, a squat row of crumbling houses cast long and foreboding shadows across the shattered sidewalk. Dull yellow lamplight buzzed overhead as the crunching of my shoes on loose gravel was the only sound in this still slumbering town. My breath puffed out into frozen air as I made my way across Park Independencia – under dead and leafless trees, several concrete benches occupied by snoring immigrants waiting for their chance to cross the border. This city was depressing the hell out of me – I cannot connect with anyone. And for that matter, what was left to connect with? I am dead inside. As dead as the rotting houses which surround me. I bitterly glanced around. Why does this city attain the appearance of the aftermath of a bombed-out war zone? Ah, I forget…it is the aftermath of a bombed-out war zone. Who am I to judge?
Ding! I sling open the door to Café Central and took a seat at the long counter. Order coffee from the tired looking waitress in the grease splotched uniform and as I stired the sugar into my cracked mug, once again the question slaps me across the face: What the fuck am I doing here in Juárez?
I recall I stated that exact question the evening prior toward two intoxicated cohorts as we sat and drank caguamas at Bar Olympico. The statement fell on deaf ears, unfortunately. They did not care for my personal woes, they were more interested in the rentboy who slinked up at us slurping on his free beer.
“For a hundred pesos, he’ll let you suck his dick.” My friend confided. He pronounces it deek.
I eyed the hustler with obvious contempt. Oh. Of course. The solitary gringo in the joint and this doe-eyed waif decided I was an easy mark. Little did he realize I am one jaded homosexual and at that exact moment and time really wasn’t in the mood for any of his shit.
“Wait a minute.” I began, pointing toward the well-formed pecs hidden under the rentboys tight, flannel shirt. “You want me,” I point back at myself, “…me…to give you one hundred pesos so you can have an orgasm?”
“Yes.” He curtly nodded, with hip hooked in that universal stance of Hustlers of the World.
“And what about me? You gunna get me off? Suck me off? Anything?” I asked.
“No, man, I’m not no faggot. I don’t do that shit.”
“Don’t do that shit? What shit? What fucking shit don’t you do?” I barked. He glared at me in consternation, slowly realizing I was not the typical weak spirited tourist he usually employs. I leaned on my stool toward him, “Again, you expect me to pay you to come?”
“That’s the way it works, yeah.” He said morosely.
“Get the fuck out my face.” I retorted and slumped into my beer. The hustler casually shrugged and decided to lurk in the cantina's doorway and await more promising prey.
One of my two friends refilled my glass from my bottle, “Why were you so mean to him? He’s a nice boy.”
I paused. Lit a cigarette and watched the plume of carcinogens swirl up into the water damaged rafters, I said, “I think my time in Mexico has come to a close. My adventure here has grown stale. Nothing interests me. I have done it all. There is nothing else. It’s time I lay tracks toward a more civilized locale.”
My words, again, fell on deaf ears as yet another macho fuck sauntered across the dirty tile floor and distracted the two queens with a smile and a coy nod.
In the coffee shop, I sat bitterly. A lonesome Mexican ballad crooned over the speakers as I scrutinized my ravaged, tired face in the mirror attached to the wall across from the counter. Except for myself and the three servers, the only other occupant was a wrinkled old fuck slumped in a booth wearing shades. Probably asleep. The half-eaten fried eggs coagulating on a large plate in front of him. Gnawed chicken bones scattered about the formica. The thought of returning to my house, collecting my things and leaving screamed in my skull. And, I did.
Posted by LMB at 12:14 PM No comments: Links to this post

The restaurant has wooden floors and mirrors behind the bar. It’s full, but politely so. We sit at the bar and I ask why we never sit in a booth. Hector says this is easier. He orders something minty to drink and I ask for gin and vermouth. Why is there a baseball game on? I’d like to drop my face on the bar and let the blood slowly draw away from my nose, down to the other patrons, drip some and pool to a puddle below my stool. I grab the menu. I shake my head. Snails and gizzards and cracklings and what the fuck is a date and why is it wrapped in bacon and stuffed with bleu cheese? Do you have ranch dressing? Of course not. Every place Hector wants to go to is too good to have ranch dressing or salt n pepper and let’s talk about sex. Fuck me. From behind.
Our drinks come and his is manlier than mine. I try it and cough a little. What is that? Martini? Yeah. I’m hungry. Why do you like me? Because you’re fucking weird. I like you. I know. Hector asks me to go to Los Angeles with him and I stretch my lips across my face like a smile and say maybe. The bartender takes our food order and I get the only thing I recognize and he gets the steamed escargot. When it comes, Hector asks me to try it. I say no. Please? No. This continues and I get frustrated. I want to leave. I want to drop my face on the bar and break my teeth, force them into my gums and pucker my nose in on itself, piercing my brain. Hector says if I don’t eat one then he’ll never be mine. I laugh and say we’re now officially wasting each other’s time.
I catch myself in the mirror, where two panes come together, and I look crooked, deformed, demonic, and utterly suave. Black leather jacket. Grey button-up shirt. Black herringbone tie. Stubble. How could he not want me? He cuts a snail in half and says to try that much. I tell him splitting it apart doesn’t help. I think about leaving and I start thinking about what I’m gonna say, ‘cause I have to say something. Or would it be better to walk out without saying anything? Not even a glance at him. Leave, man. Get up.
The bald man in the cowboy suit next to me leans in and says something about the game. I say something back to prove I am a man and I know sports and stuff. Then Hector and the bald man talk with me in the middle feeling suddenly awkward, but watching this scene in the mirror. Hector likes the bald man’s ambition and his watch and how he speaks four languages. I notice his discolored teeth and beady little eyes. Hector says he’s moving to Los Angeles, the bald man asks when, Hector says March, the bald man says he should be out there then. I say we should get goin’. I finish my drink and don’t take another. Look at Hector, look at the bald man, the game, the condensation ring, the mirror, me. What the hell happened? Heavy sigh, noticeable. Hector leans to my ear, You gonna fuck me when we get home? You gonna leave your clothes on? If you want. Maybe. You wanna go? Yeah.
I pay and in the taxi, Hector asks if I want road-head and I say no and ask the taxi driver to turn the radio up. I’m hard but we’re almost home. Up the stairs, to the bedroom, push the blankets aside. I fuck Hector bent over and I pull and push into him, using his hips like handles. Hector moans and sighs and whimpers and tells me to lie on my back. Tells me not to move. He fucks hard, twists and grinding but changes his mind and bends over in front of me, ass spread. Fuck me ‘til you come. I tease then give it then take it then give it deeper, taking Hector to the furthest until I have to pull out and empty onto him, weakened as steam in cold night air. I like you. I know. I mean, I like you a lot. I like you too. But why, though?
Posted by LMB at 8:31 PM No comments: Links to this post

Posted by LMB at 1:00 AM No comments: Links to this post

the ballad of roland gerodias 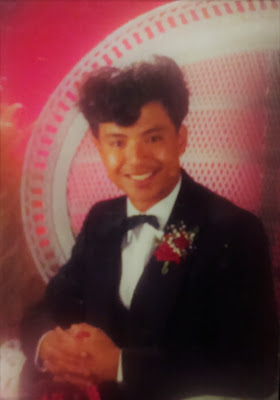 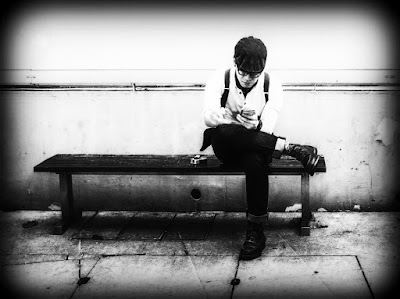