I think the same way, Doctor.

Posted by LMB at 10:01 PM No comments: Links to this post

Spent the evening at Sonny's Bar with that neanderthal Manny. It was a very calm night drinking and listening to the Cantina Band tootling away in the corner until this bloated drunk drag queen swished in.
Now Manny, much like myself, does not enjoy the company of transvestites - you long time readers will remember that I have knocked flat or set fire to a few in my time. This drunken thing sits all lady like at the bar next to Manny - who is handsome in his own right - and proceeds to paw at my friend. Much to his agitation and to the point he growls, "Fuck off, ugly cunt!".
Well, this bedazzled monster didn't take his cold shoulder in stride and began causing a full on faggotty scene of overly dramatic proportions. She began with the snide remarks that degenerated into out and out insults on Manny's and my person. Enough of this shit - I stood off my stool and smacked him/her across the jaw with a right hook. Then it was on.
Screaming like a wounded banshee, Ms. Thang came at me like a wolverine, clawing and slapping with unbridled fury. I had to admit - the cunt got in some good licks. We did our ballet around the center of the bar swinging fists into each others faces. During the drunken smackdown, Manny grabbed a chair and crashed it across her back - said tranny fell to the floor as Manny continued to viciously smash her face with his boot. Blood began to splatter on the dirty tile as appalled patrons gawked on. The bartender began yelling "Stop! Stop it now! She's had enough!" Then the cops showed up.
Thrown up against a squad car outside as the battered tranny was hoisted into the back of an ambulance - the cops inquired what had started it. We both explained and thank baby jeebus those pigs were homophobic (they thought we were straight and the tranny got what she deserved) and were about to let us go - that was until Manny's outstanding warrants popped up.
So, as I stood there - pain numbed by alcohol - I watched as the squad car peeled off into the humid darkness with a forlorn and pensive Manny cuffed in the back seat.
I just stumbled home - after being told that I was barred permanently from the bar - and made plans to visit Manny in the Detention Center downtown tomorrow.
Ha! Ha! Ha! Just learned my FaceBook account has been disabled for unknown reasons. If it was some vindictive person - I am flattered that they went out of the way to do this. But, much like their lives - they have failed. Either it will be re-instated or I will create a new one. All my close contacts I kept their email accounts - so, their attempt has fallen flat.
See ya soon back on FaceBook!
Posted by LMB at 1:39 PM 2 comments: Links to this post

I tell ya, living this sedate life has it's disappointments. Take my blog, for instance. I have been concentrating so much on my novels, that I really have been ignoring it. I think it has run it's course. I really have nothing to write or report anymore since I really don't do anything. What do you want to read? How I am buying new furniture for my flat? Setting up the film co-op at the Cafe every Wednesday? Lounging around in my place watching TV? Nope - my life has settled down monumentally and you know what - I am happy.
I knew I had changed when I walked over to Juarez a few days a go to buy three packs of Luckies (They had stopped making them here in the States, so I must get them on the black market) and after I had gotten them, I fancied the notion to rent in my old building. Man, my outlook on my life and mind have changed. I stood looking at the crumbling building - a place for years that i saw as exciting, romantic, and adventurous. What a smelly, filthy dump. Though the landlady had a apartment to let and I said I would take it - on the walk back home I told myself a resounding hell no.
Yes, I think the days of wandering and subterranean living is over in my life. I realize, you judgemental ass, I had said that before - but, this time I believe it is for real. I just don't want it, anymore. The thrill has dried up.
I had contemplated shutting this blog down - but, no. I think in the coming months, I shall be blogging of my attempts to size up and infiltrate the gay and artistic lifestyle here in El Paso.
So, sorry - at the moment it's all going to be mundane from here. But, you know my life - it can change at the drop of a hat...
Posted by LMB at 3:31 PM 1 comment: Links to this post

Times are tight and disappointments routine. Dig what I mean, cabrones?
Stood in a soup line cause I'm broke. Nothing at the house through no fault than my crazy, manic depressive ass.
So, as I was saying - standing in a soup line in the sweltering afternoon sun with about one hundred other sad, sweaty beat tramps. The stench from unwashed bodies - coughs of TB and Hep filling the stagnant air around me. Not enough though to overpower the wafting aroma of the boiled gainish hens down in front of the patient que.
A church had set up a field kitchen in an arboreal park - a long table with gas stoves and great silver pots containing boiling chickens, smells of grease and pepper. Loaves of fresh bread and stacks of warm tortillas set to one side next to a cauldron of baked beans.The church volunteers moved with supersonic speeds in heightened moods preparing the hobo banquet - smiles and back slaps and high fives. Assholes. Though, I had to admire their energy, the sun was fierce.
I stood there sweating in my straw fedora and shades and raggedy ass jeans and wrinkled t-shirt, glancing around at the people nearest me. Shabby men in sweat stained clothes, holding their backpacks, their bundles or carts crammed with nostalgic memories of what life was before it all fell. Most chatted to themselves, others stood catatonic - stomachs grumbling in the heat - others screamed at demons that I imagined screamed back. I lit a cigarette as two old bums behind me passed a fifth of bourbon back and forth. Guffawing and spitting on the dusty grass.
I struck up a conversation with the black guy that stood in front of me - he being mid-twenties, scrawny and draped in hip-hop gear. Not bad looking.
"You're not from El Paso, huh?" I asked when I met his sympathetic gaze.
"Nah." He smiled. "Nah - I'm from Chicago. I got stuck here, coming from Ft. Lauderdale on my way to Phoenix."
I laughed, "Yup, that's El Paso for ya - the trap of the great southwest."
Then, the old fucker behind me started pushing and bumping into me as he gesticulated his retarded drunken conversation to his friend.
I commented this offending fact to my black friend, guess the old fucker behind me heard and replied with a hardy "Fuck you."
I rolled my eyes and as the guy I was talking to was taking a cigarette from out of his pocket - he dropped it by accident onto the ground. The old fuck bent over to pick it up - blatantly throwing his flat ass up in the air towards my face. He farted.
Amid chuckles of his friend and not to lose face with this idiot, I pushed him, causing the old tramp to almost fall over, but he caught himself. Popping up like a jack in the box, he growled, "What, mother fucker - you want your ass kicked?"
I thought this asshole was more bark than bite - I stepped away two feet and reached in my front pocket of my baggy jeans as if I was holding a weapon - instead, I just clenched my keys. "Let's go, asshole - I'll cut you."
Without a word, the old tramp whipped out a huge butcher knife from the folds of his jacket, grabbed me by the neck, threw me into the dirt, and held me by the neck with his knee on my back.
"Watch it, motherfucker - or I'll gut you right here and now!" He growled - I could feel the blade pressing on the side of my throat.
Damn, that's a big fucking knife, I thought. I think I smiled.
People nearest us began yapping to stop it and calm down.
The old fuck slapped me across the back of the head and got up saying, "You ain't even worth it, prick."
The soup line began to jerk forward and I tried to get back in my place - but, the others wouldn't have it - harsh glares and silent tightening of space so as I could not pass back into my place. I have been ostracized from this element. Outcast from the outcasts.
I just stomped back to my house and crawled into the coolness of my bed. Indeed, I thought, this is my life and I am not worth it.
Posted by LMB at 3:58 PM No comments: Links to this post 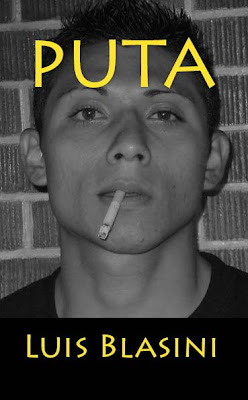 My next novel entitled "Puta" will be ready by the end of this month! Stay tuned!
Posted by LMB at 1:52 AM No comments: Links to this post

Posted by LMB at 8:20 PM No comments: Links to this post