I enjoy the people I come across. They're poor, some homeless, exfelons and shit. But, fuck it. I'm not here as a rehab for them, I'm just here to listen and provide good conversation, maybe cigarettes or beer. People like that, they deserve that much. I know what it's like to walk around feeling hopeless, but nothing to the extent of how they feel. You can't fix people like that, but you can make their days a little more worth while, ya know?
Posted by LMB at 6:24 PM No comments: Links to this post 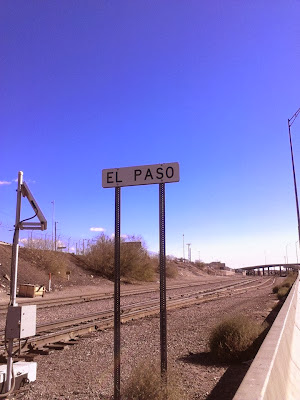 I sit in that rattling van - the hobo express - and morosely stare out the great, dusty window as the orange sun slips behind the Juarez mountains. The van is packed with smelly and tattered homeless men, the tight air stale with their funk.
We are deposited at the brand new El Paso Rescue Mission. The weary dart into the building, but I stay outside in the biting cold and light a cigarette, gazing out across the twinkling, yellow lights of Juarez City across the silent, black Rio Grande. The faint pop-pop of gunfire on Christmas eve.
I sigh. I have spent December in El Paso. I realized after my third day that I had made a dire mistake in coming back. A mistake quickly amended. I have set my sights at the beginning of 2014 to make my way to Calexico and will dig that scene before heading on to Tijuana.
As 2014 rapidly approaches and you snuggle securely into your comfortable middle class ever darkening future shrouded by quiet acceptance of conquest and murder in the name of progress, let us take a moment to remember the Lost Angels who inherit this continent, the other people, the people in motion, of various races and ethnicity, speaking many tongues, migrating from one place to another as seasonal laborers, wandering around as hobos and hitchhikers, meeting each other in brief yet somehow lasting encounters.
These are the wild, alive, mad, undesirable, crazy individuals who soar like flaming comets across starry nights, who chuckle a hearty fuck you to your soul sucking society of petty, fruitless acceptance from bitter, overly judgmental constituents. They exist in stark contrast to your 'I am an individual yet I must be like everyone else' status quo. I have joined their ranks and will never turn my back on them. I have reached that point of no return and I've never felt more alive.
Posted by LMB at 6:42 PM No comments: Links to this post

I awoke from The Sickness at the age of forty-five, calm and sane, and in reasonably good health except for a weakened liver and the look of borrowed flesh common to all who survive The Sickness. . . . Most survivors do not remember the delirium in detail. I apparently took detailed notes on sickness and delirium. I have no precise memory of writing the notes which have now been...

Posted by LMB at 12:00 AM No comments: Links to this post 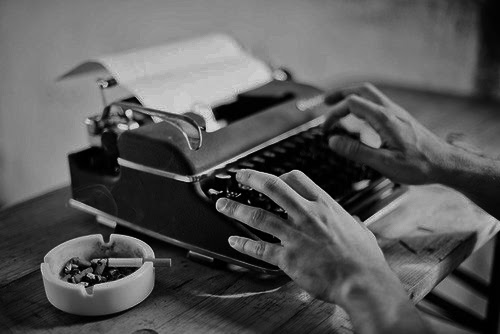 The Underwood gleamed up at me in contempt. I thought trying to write on an old fashioned typewriter would connect me more intimately with the language. So far my muse had remained elusive. I could hear the soft noir soundtrack drift across the parking lot entering my room through the open window. My Technicolor world transformed instantly to the grainy black and white world of Manhattan 1943. The bare bulb in the overhead lamp swung slightly from an unexpected breeze. Words…where were my damn words?
Unfortunately, it takes more than a cheap suit, bourbon and a stale cigar to create inspiration. I do like the black and white theme. The world seems both comforting and sinister as if at any moment men armed with Tommy guns would emerge from the bank across the street disturbing the genteel urban peace of another day. Prohibition may have been a decade in the past, but the deadly wise guys tearing up our fair city were still around. I need a story damn it. What good is a hard drinking PI without a story?
Then came the soft wrapping of youthful knuckles on the door and a slim figure silhouetted in the frosted glass; my heart was suddenly hopeful.
“Enter,” I snarled
The door swung open. The kid was pure street hustler and trouble wrapped tightly in a look of desperation and sexual tension that beamed from doe-like eyes. My muse had arrived.
Posted by LMB at 2:00 AM No comments: Links to this post 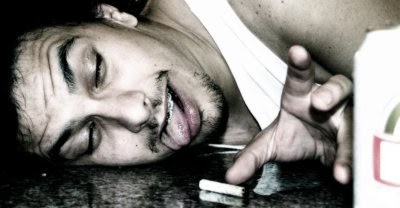 The bedsheets moved and then slid aside to reveal a mess of tousled, obsidian hair and, sliding further down, a pale naked arm. The owner of the arm made a sleepy grunt and pulled the sheet back over himself. After a moment he rolled over to his stomach, slowly propped himself on both elbows, hair falling all over his face, and looked around.
He was alone in bed. Near the window, illuminated by pale morning light filtered through thin curtains, a man was sitting naked at a desk, a cigarette dangled from his lips as he typed the keys of his laptop lightly in order not to make a sound. Once in a while he would write something down while humming very quietly. After a short moment the man glanced in the direction of the bed; his face showed surprise when he realized his companion was awake.
"Ah, sorry, Timothy, did I wake you up?" I asked.
"I woke myself up." Timothy sat up, wrapping bedsheets tightly over his arms and surveying the other person in the room from behind the curtain of his hair. "Aren't you cold?"
"No, see, this paragraph I had problem with? I just came up with the greatest..." I stopped gesturing with my pen and considered it for a moment. "Actually I am cold."
Timothy laughed quietly watching as I looked for my pants. Timothy realized, after reading one of my books, held me in regards as a great writer but, as with many creative professions, it came with the danger of my getting so immersed in creating that I lost focus on real life and forgot to dress, to eat, to sleep... or that I was with someone.
Timothy sighed deeply and gathered hair off his face. This situation wasn't easy. For him there was a certain disconnection between the physical aspect of sexual pleasure and actually doing it with someone, which he figured wasn't a problem for most people. He had to concentrate to stay in the equilibrium and achieve arousal and get to the point where actual physical response took over. It didn't seem to be a problem for his writer friend, who could get into the mood almost on command and on top of that had a stamina that would put many rabbits to shame. Timothy's physical stamina wasn't something he'd normally complain about, but he could not match his new acquaintance in that respect. Yet it was still getting more and more difficult for Timothy to actually go over the edge, because even at those times when my head was filled with prose and when Timothy saw that spark in my eyes, when I inadvertently spewed garrulous monologues of ideas Timothy lost the concentration completely. He still pretended. He helped me finish. He smiled. But he ended up sore and tired and unsatisfied and angry at himself.
He wasn't angry at me - it wasn't his fault. Timothy didn't even tell me because he had no idea how to explain it without me thinking that he failed at technique, that he did something wrong when it wasn't the case. Timothy's desire wasn't directed at people - it was as simple as that. He could make himself come strong in just a couple of minutes, but when he was with somebody it took much more effort just to come at all and it was much weaker and more than for the pleasure he really ever did it for that special connection with somebody... which made the fact that that somebody was more focused on music than on him really disconcerting.
Timothy stirred, realizing that I had said something; he raised his head and saw me hand him fresh pajamas.
"Sorry...?"
"I said, you're really pale and should probably sleep some more. I hope you don't need to go to the university today."
"I do only my own research now and can basically go whenever I want." Timothy took the pajamas and rubbed his eyes; he was feeling drowsy.
"Maybe you should take the day off; you really don't look too good." I lay on the bed, waited for Timothy to finish dressing and embraced him tightly. "You're cold."
"I guess you're tiring me out and I have no energy left for heat," Timothy closed his eyes and let my warmth wash over him.
"Are those still giving you trouble?" I gently touched his cheek just below one of two diagonal scars, barely visible in this light, that framed his eye. Timothy didn't reply but I saw before in daylight that the scars on his face, arm, and hip, despite being now a good couple of months old, still looked pretty fresh. "Those damn curses really heal slow..." I gently made Timothy lie down, covered both of them with a blanket and tenderly put a hand over him.
"I guess with my present stamina we probably should not do this for a while..."
I murmured a confirmation and Timothy felt my fingers affectionately brush his neck.
As he was falling asleep, Timothy tried to take in everything he could: My steady breath, my warm arm over his back, the too-big-but-comfortable pajamas. He had already decided it was the last night he'd spend here.
Posted by LMB at 3:07 PM No comments: Links to this post