In Heaven Everything Is Fine

Posted by LMB at 2:12 AM No comments: Links to this post

(Note: This entry was written long-hand in Plaza San Jacinto two evenings prior.) 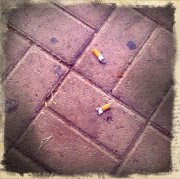 All is lost. All is lost. All. Is. Lost.
What am I doing here? Sitting in this park - alone. Miserable. Again, severed. Is this my fate? To wander this dirt ball bitter, sad, filled with angst and a common hatred for people? Where - when - did it all collapse?
I was someone once. Not a person of fame or importance - but, a human being with feelings and a lust for life. Now, I am a double-exposed photograph - faded, forgotten, uninterested.
Is it too late to change? Have I gotten so far out that there is no chance of coming back? I'm talking on a mental level here.
Then again, I could be talking crazy and you don't care, anyway...I know I don't.
For the past two years, I had tried to live as everyone had suggested - stable, responsible, boring.
It has - within the last year - been eating my insides like maggots. Two years ago, I was full of vigor and energy. Now, I am weak, over-weight, and fearful of any change. And to top it off, stuck in a fucked up, petty city inhabited by fucked up, petty citizens - a city I vowed never to return and yet here I am. Fucking karma.
I had recently dumped my concerns onto the uninterested ears of a long time acquaintance. He summed it up with, "Blasini, you know as well as I do, you are an outside cat, not an indoor cat."
Of course he is right. How could anyone be content stuck in a lifetime of rut.
I have narrowed this predicament down to two options: Either go on the road and travel on to Puerto Rico as I originally had planned or just jump down to Colombia and teach English. Either are quite exciting, yet both attain their bad sides.
If Puerto Rico is a bust - I can at least put that behind me and move on to Colombia. What do I have to lose?
Of course, I have everything to lose - everything I had worked for the past two years. And, what good is that? Comfortable boredom? It is time. This city screams at me, "Get out!! Get out, now!! You are not welcome here!!"
Sigh.
Why fight it? Why debate it? Why fucking psycho-analyze everything?
Close your eyes and jump...
Posted by LMB at 12:14 PM 3 comments: Links to this post 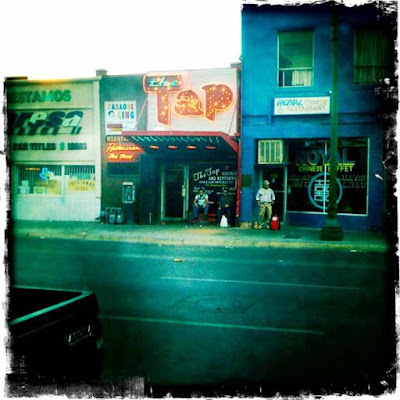 Posted by LMB at 2:33 AM No comments: Links to this post

My new novel titled Dark is the Night is now ready and published. It can be purchased at Amazon.com, Barnes & Noble.com, and other fine online booksellers. Buy a copy today! 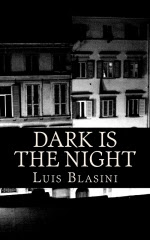 Dark is the Night is an anthology concerning four, unrelated people - four of societies outcast and down trodden that is full of bite, color and confidence and yet, at the same time is rooted in heartbreaking experience and crackling with humor, insolence and diatribes.

Dark is the Night is a disturbing picture of low life existence. Partly written in the language and mores of its times - yet, the author Luis Blasini transcends that. There is little in the way of hope or love in the book and definitely is raw - shocking - even to those of us who thought nothing in modern fiction could shock us. Dark is the Night is one brilliantly sustained song of the brutal, the outcast, the desperate, and at times - the cruel that exists inside all of us.

Dark is the Night definitely is a book that will be remembered in the literary history of America.
Posted by LMB at 1:08 PM 3 comments: Links to this post

Posted by LMB at 10:07 PM No comments: Links to this post