On the dusty sidewalk next to me squat my black duffel bag overstuffed with clothes, notebooks, and personal items I just couldn’t live without.
A few feet away, the massive silver and mauve bus lay idling. The passengers - all Mexican citizens - stood silent and pensive just like me. Mostly elderly - stooped old men wearing tattered yellow Stetsons and faraway looks clinging to cardboard boxes tied with nylon string. I mulled over what they were thinking about. New lives? New vistas? The simple fact of spending their remaining years with loved ones? I envy the dead.
Then it dawned on me what I should have been thinking about and the thoughts were this - I had wasted a year of my life in a numbing existence of relatively comfort and normality. A day hadn't passed my mind screamed, "How can people live like that? Doing the same thing day in and day out - year after year. The same friends, the same conversations - polite patter over warm cappuccinos on a frosty morning – languidly walking the boulevard window shopping for items you could never afford. How can people go on?" Without hesitation I forced myself out of that early death - Change is Life. Chaos is Change. Live to experience and not to simply exist. I made the decision to turn this stale life up a notch. Plan? Eh? A couple of weeks in Tucson, a few in El Paso, maybe San Antonio via Laredo then onward to New Orleans to finish and settle for a bit in La Perla, Puerto Rico. No time limit - just travel and write. Sounded good to me.
At the bus station, I took another long drag from my cigarette. Glanced at my watch - the bus was running twenty minutes late. I struck up a conversation with an elderly mother in a faded yellow granny dress with red wicker purse waiting silently next to me, “I hope this bus gets going.”
Her face wrinkled into a smile - skin the color of a rumpled paper bag - and nodded, looking out into nothing.
In her tinkling voice she said, “You will get to where you are going, joven. Not only that, you will come back and then go someplace else.”
The words of a Guardian Angel.
The fat, mustachioed steward poked his head out of the reception window and announced in Spanish it was time to board and with ten other passengers, we herded onto the bus. Taking my seat in the middle - as I always do, right side - pleased in the fact that the bus was not packed and that all the passengers, including myself, had a seat to themselves. I stowed my overhead luggage and hunkered down to the long, unknown future.
With a blasting fart of black soot and whining of gears, the bus shuttered and slowly rolled its way through congested street traffic to the on ramp of the 5 freeway north.
Posted by LMB at 1:00 AM No comments: Links to this post

Posted by LMB at 1:00 AM No comments: Links to this post

one from the vaults

Ceasar was only interested in the financial aspects. His concerns more focused on supporting his wife and newborn daughter.

Posted by LMB at 2:00 AM No comments: Links to this post 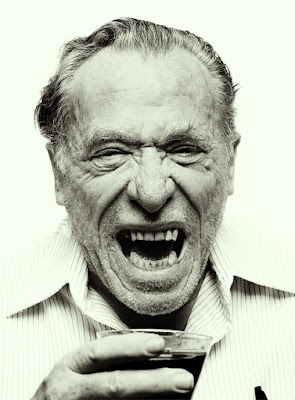 Posted by LMB at 3:46 PM No comments: Links to this post

are you there, francisco?

The sky was a mottled grey from the drizzling rain. The wailing of an ambulance below, distant rumble of air hammers, always building and repairing in The City.
I sat naked in the rickety hotel chair and watched the boy sleep. 1:47pm the clock read. Could be wrong, felt later. Lighting a cigarette, I sat transfixed as his erection melted away in the early afternoon. Francisco, he said his name was and looked enough like a Latino Leonardo DiCaprio from Gangs of New York to pass as his brother, floppy light brown hair and scraggy goatee. He lay naked on his back amid rumpled yellow sheets in this ratty hotel embraced in the arms of Morpheus and content as a nodding junky. I took another drag and scoped him out, hairless thin frame, eyes shut, pouty lips parted in sleep breathing.
We met last night at a dive bar on Broadway called Chee Chee's and struck up a conversation amid the thieves and the dykes and the just released cons and Atomic by Blondie blasting over the juke box. Next day had brunch with him at a local Chinese restaurant - afterwards we walked over to a bar. Chit-chat ensued over drinks and then walking drunkenly to the Hotel Pickwick, a flop that by American standards can't get any shittier. Looking at me and smiling, Francisco said he needed to score for some meth and would I front the twenty? Sure, why not? Walking down several alleyways covered in shit, bums, and abandon shopping carts, copping his dope from a slick black with gold caps, we soon entered the dank hotel lobby. Flaming old withered fag with bad purple-tinted permed wig at reception.
"How much for a room?" I croak.
"Two Queens?" The receptionist asked.
"Nah, just two boys that need some sleep." Quipped Francisco.
I laughed with cigarette between my lips and the warm glow of five whiskey sours in my gut. The room was occupied by large black roaches and bad tattered furniture. Yellowed walls stained by second hand smoke. The pillow casings had the faded tell-tale blood spots of bed bugs. The television got three channels; English, Spanish, and soft core porn.
I lay on the bed and watched Francisco take a shower, water running down his long thin smooth frame, over an ass that was like a peach. He sits naked on the bed and asked if I wanted to try a bang. Nah, not in any condition. Needle clogged twice, thin line of blood from inner elbow to wrist. I look away, always freak me out watching someone probe for a vein. He sighs as it goes in sweet and pure. I sure can pick 'em.
The sex was much needed - hostile, violent, hot - the bed creaked and rattled with our fucking. Your basic crimes against nature. Several nasty positions later, covered in sweat and semen we lay embraced as the rain pounded down outside our fifth floor window.
Like I said, sat there and watched the boy sleep. Finished my cigarette, gargled with what was left of a can of Steel Reserve, got dressed and left twenty dollars on the nightstand. Sweet dreams, kid.
I dart out of the hotel onto wet sidewalks and incandescent lagoons. Shifting through time and The Long Wait. Cigarette smoldered down to a butt - the cries and shouts and hacking of a hundred hobos echo in my mind. I stand and I wait. Waiting for the world to turn.
I am up to speed with the necessities of my quest - that long walk to Nowhere. But I am doing it anyway, you dig? The natives are getting hostile and I am quite drained from their antics - I don't wanna here of your pathetic problems, got my own.
Nothing to write - cause nothing’s going on.

Posted by LMB at 3:28 PM No comments: Links to this post

My foul smelling hotel room rests on the garbage cliff overlooking the poor Juárez barrio, tin shacks and white roofs of crumbling adobe, crisscrossed in dusty wire cables and television dish aimed up high with little dirty gardens down below bounded by the rusty metal wall and superhighway nightmare 20th century I-10. I stand on my garbage cliff under the setting sun rays of Huītzilōpōchtli and understand I am at the end of Mexico - the longing pulls at me, depression of a million nostalgic images inundate my withering mind.
The town is so noisy – dirty and trash laden, streetfulls of wild boys all night brandishing their erections under chino pants, drunken nacos in yellow Stetsons and sagging pot bellies, vulgar restaurants, nasty whore hotels, musicians, half American stores, jumping beans and tortilla concessions, Chinese Masonic lodges and barbers too. Big halls for hip-hop discos and ranchero music, painted crudely with monolithic donkeys. A portrait of a Chihuahua glares down at me donning Sante Fe style kerchief and bejeweled vaquero hat.
I light up a cigarette and walked through the border at night back to my sad, lonely apartment, a dead silent fairyland of U.S. dusk - deserted ghost streets and sad quiet air-cooled diners with white capped waitresses joking softly and no one on the streets.
A dream. We live inside a dream.