Excerpt from Dark is the Night: Chapter Two: It's Going To Cost You 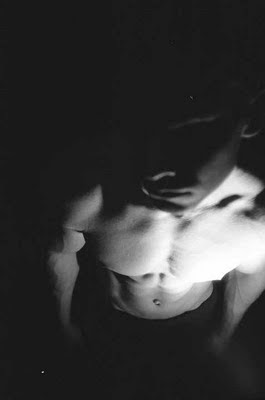 Johnny rolled over in the musty, sagging bed and tried to piece together the night before. The cramped, dank room he was in was windowless - graffitied walls painted pink with the lingering vaginal stench of a million Mexican hookers.

He lay naked on an old, spotted mattress, itself reeked of mildew and various indescribable aromas. The bathroom was down the hall. Johnny got up slowly and staggered to the chipped, porcelain sink next to the bed and took a piss, rinsed the basin with water from the tap, then splashed water on his greasy face.

Gravity took over and Johnny slumped uncontrollably back onto the bed. He lay there dizzy and aching - head pounded as he stared at the naked lightbulb that dangled from a wire that protruded out of a hole cut in the plaster of the ceiling. Directly above his face, there was a dark orange spot in the plaster.

Johnny’s mind throbbed with the kaleidoscope of a million images:

The thick, green velvet curtains of another cheap hotel room almost blocked all light coming from outside. A thin, yellow ray of sun cut through the dankness like a knife. Dust swirled in eddies. Johnny was naked, on his knees in a submissive crouch; hands on his knees. Towering above him was a 40 year old Hispanic ex-con that had recently been released from the border patrol after being detained for two days in the States. Or so he claimed.

Johnny met him in the Plaza. Said he could get a good score on coke. His torso was a mass of tattoos and scars. He was of medium height and beefy/muscular.

Through fucked up eyelids, Johnny saw the ex-con standing above him, naked...no not quite...his khaki pants were dropped to his ankles and the sweaty wife-beater was pulled up over his thick neck. A gold necklace of the Virgin of Guadalupe was the only color across the wall of brown chest. With his muscular left hand, the brutish ex-con held Johnny by the hair and it hurt and with his right hand he masturbated wildly.

Johnny’s eyes were not focused on the thick, brown penis, but was more entranced at watching his huge testicles bounce rapidly as he jerked off. Johnny glanced up to that bulldog face. The grimace. The thick moustache. The slicked-back, black hair.

“Don’t you fucking look at me!” He snarled and whack! Slapped Johnny across the face with an open palm.

Johnny about fell over, but the ex-con roughly grabbed Johnny by his hair, again. Johnny could feel a trickle of blood ooze out of his nostril, down across the lips. The ex-con tightened the grip on Johnny hair. Johnny winced. It hurt.

The ex-con rose onto the tips of his toes and grunted like some kind of beast. Johnny could feel the hot licks of the man’s semen as it splashed across his face. The ex-con then jabbed his thick, short penis into Johnny’s mouth and rammed it in deep, pushing down the back of Johnny’s head. Johnny gagged - he couldn’t breathe. He felt as if he was going to throw up.

“Take it, you fucking faggot!” The ex-con growled through gold-capped teeth. “Clean that dick!”

He roughly shoved Johnny down onto the cold, dusty, concrete floor. Wiped his penis with a ragged towel and tossed it onto Johnny’s face.

Dressing, the ex-con snarled as he walked out with his back to Johnny, “You’re shit’s on the table, puto!”

Slam! He was gone and Johnny was alone. Johnny could taste semen and blood on his lips. He looked up through a haze to see the junk and pesos that the asshole left on the nightstand.

Man, the things I do for this shit.

Posted by LMB at 10:27 AM No comments: Links to this post 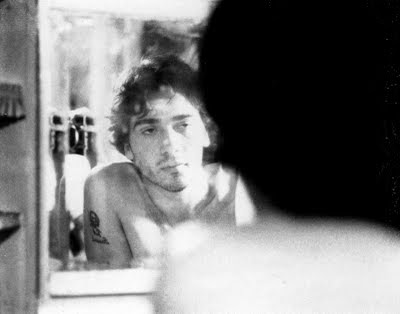 Another Luis Blasini moment at the bar: A young Mexican immigrant looking motherfucker sitting alone. Handsome. Homeless. Insane, Heroin junky. Sat shivering and scratching sipping the beer I bought him and droning on and on how he could use a shot. He gets extra friendly when I mention I got my own digs. Needed a place to crash. I tell him how it is.
"What? You a faggot?" He laughs.
"Yup" I smile between gulps of beer.
Passing hours of sexual innuendo.
The time out back smoking clenched it - the Latin Adonis puking up the chips I bought, cascading steamy streams of pinks and transparent yellows - cursing his existence, cursing queers in general over his first cigarette by yours truly. I make my escape into the still chill of the night. Oh, how I can pick them! Left that fucker sitting alone as cha-cha music blared from the rockola, left alone to his beautiful, sad. beat dementia...
Posted by LMB at 4:35 AM 1 comment: Links to this post