A warm morning and I walked over to Plaza Santa Cecilia and breakfast on good coffee and Mexican sweetbread. Joked with the waiters Miguel and Victor. Made small chit chat with two vatos that had been deported the previous night - they at least had some money for breakfast. Victor confessed that he too got the boot from the Land of the Free, Home of the Brave. "Your President does not like me." Victor smiled.
Indeed.
Decided to wile the afternoon away at Cinema Latino because - well how can I put this gingerly? I was horny. When I entered the dank cinema, some blond broad was blowing three studs on a couch onscreen. I took a seat in the back - one down from a very macho looking man sporting a goatee. Hey, you start grabbing your crotch in a porno theater and someones going to goose you. This guy was rubbing his nether region and I "went for it". He flinched - pushing my offending hand away and laughed, in English, "You want to play?"
Long uncomfortable pause. Then he unzipped his Dickies shorts, leaned back and mumbled, "Vamanos." And I did my thang. He had a man cock. Big and thick. I took no prisoners and sucked that fucker like a champ! He pulled my head away as great white globs gushed out - splattering the back of the seat adjacent and glazing his thick muscular hand. All I could say was Wow.
I left this handsome man to his mess and went downstairs to the men's room. The fags were lined up at the urinals watching each other masturbate - I dodged into a stall and took a piss. Exiting the stairs leading up to the cinema, I was stopped by a wild eyed cockjunkie and he meant business. The little hottie pinned me in an alcove and before I could say Que onda, guey? my pants and shorts were yanked down around my ankles and the little shit took no time doing the doing. But he turned me off by repeatedly pressing to go to a hotel. No way Jose - so I composed myself and returned up into the cinema.
Next up was a little Indian vato - cute is what I'm aiming for. Slurp slurp squirt. The entire back row was a goddamn blowfest - six or seven fags all doing that which is inconvenient. Satiated and a little annoyed - this goofy fat fuck wouldn't leave me alone - I left for the Plaza. Ran into an acquaintance who bought me a pack of smokes and a hamburger from Carl's Jr. He explaining that he is down from San Diego the afternoon for a Rentboy's skillful message and lunch at swanky Sanborn's Restaraunt. After I hitched a ride home from said person, I lay in my bed smoking; listened to Love Line on 91X fm and finally passed out.
Posted by LMB at 11:59 PM No comments: Links to this post

Checking my e-mail and was tremored by a correspondence from a sibling. "We should keep in touch." It read. My mental shrug was why? I see no reason for it - I hold no feelings or ties for these people. For years I have roamed and they - The Family - never cared or worried how I toiled and suffered not once offering any assistance in my plight - if anything turning a snobbish nose up on their psychotic faggity brother and/or son.
I do not have hatred for them (except for the Father.) I have what I can only sum up as apathetic nothing. I am not the same person they remember - I have metamorphosed into something else - a cold uncaring corpse with one foot in the grave. I was born alone, I live alone, and I shall die alone - as far as being part of that family unit. I have in my possession very good friends and they are by far more caring and reliable than these gossipy arrogant assholes.
So, the wind up is - I erased the letter without response. I have no wish to contact them - if only they could return the courtesy.
Posted by LMB at 11:39 PM No comments: Links to this post 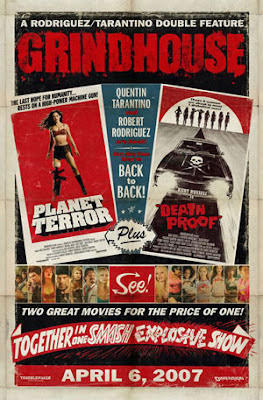 Breakfast on juevos rancheros at Cafe Norteno and they were tasty - downed it with delicious jaimaca fresca. If it were any better God would have kept it for himself. Joked with my two friend mesero´s Victor and Miguel. Phillipe was there and spun the tale of how he was frolicking in a whore house the previous night - was licking some twat and it was bitter, he says. Offered the hoochie a dollar to inspect that filthy snatch but she refused and he walked out without paying. Her insulting screams echoing down a dark windy street.
Movie day! Yes, I braved the long tiresome line at the border - an hour and a half wait - tolerated the vicious arrogance of the Customs Inspector - the Face of Our Nation - and jumped the Red Line to downtown San Diego and enjoyed some cinema.
Let me instruct you in some cinema history - a grindhouse is a shoddy movie theater of the '70s, trying to sustain itself with double bills of cheap sex-and-gore exploitation flicks, before succumbing to outright porn. For directors Quentin Tarantino and Robert Rodriguez, gritty movies of the grindhouse formed part of their essential education, and they echo vividly through Reservoir Dogs and El Mariachi, and most of the rest of their high-velocity films. And that's why they're now paying tribute with Grindhouse, a wild, wacky, bloody and hilarious tribute to such movies, complete with scratched and faded prints and missing reels. In Grindhouse, each director contributes his idea of a typical exploitation flick, surrounding each with trailers for equally tattered B-movie sagas. Since fans of these trend setting filmmakers know all too well from whence they came, they'll enjoy watching how their heroes look back fondly, one more time. Rodriguez offers Planet Terror, a horrifically over-the-top zombie fest, as the living dead lay siege to a Texas barbecue joint, until they're dealt with by a gutsy, one-legged girl (Rose McGowan) with a machine gun blasting from her stump. Tarantino finishes the double bill with Death Proof, an action flick that blends elements of the slasher and the car chase. Kurt Russell stars as a demented former stunt man who uses his early '70s Chevy Nova as a killing machine, preying on young women. I enjoyed each perverse and bloody movie on its own terms, but I must admit I liked Death Proof a bit more. Rodriguez offers relentless, high-energy action and gore, while Tarantino famously pauses his action so his characters can have strange, often hilarious — and brilliantly written — dialogue sequences. That's why Rodriguez's film seems more in tune with the 'grindhouse' concept. His movie seems right at home. Tarantino's Death Proof, however, is a bit too clever and well-written to find a home on this double bill of a movie, but that doesn't mean it isn't incredibly enjoyable. These movies have state-of-the-art car chases, are wildly entertaining, as long as you're ready for the high-intensity gore factor, the sex and the violence. The performances by Kurt Russell, Freddie Rodriguez, Zoe Bell and especially Rose McGowan (as the one-legged gun-shooter) are all very, very good. Highly Recommended.
On my way home and it was biting cold - small eddies of trash blew in closed doorways. Back in Tijuana, I was briskly walking through The Plaza when I am beckoned into Bar D.F. by my good pal Daniel - ex-waiter at Norteno who is now bar tending the joint. There is nothing like free beer, I tell you. And when it´s among good friends, it´s even sweeter. After five cerveza´s Sol I was pretty lit and the gab and jokes flew - good music on the jukebox. Damn! Can that Molotov rock! Ivan popped in - to borrow pesos - wound up drinking with me and that hottie can fucking drink! Upped the ante when Enrique shows up - strung out on goofballs - but a fun time had by all. After atime like all good things, the steel shutters slammed shut for closing and shaking hands - and passing out a few more pesos (Thank you, Ivan.) I light a Faro and disappear in a drunken haze of a cold night.
Posted by LMB at 2:39 PM 1 comment: Links to this post

Came down from my room early bleary eyed mouth sticky and evil tasting to hit that hot shower, know what I mean? There are six rooms for rent in the boarding house I dwell and all share the shower and can - except for one fat fuck and the goofy drunk that is my immediate vecino (I swear the old shit keeps blaring that television at night I'm kickin' his withered ass!) Anyhoo - save for chubby and retard the other rooms are occupied by somewhat handsome fellas all friendly and respectful. But, Arturo stands out - a short very well toned vato that makes my mind move in strange directions.
So I'm clomping down the metal spiral stairs to the shower like I was saying - and there was Arturo standing in front of the sink butt ass naked as a newborn with a white plastic bucket - what was he doing with the bucket - who the fuck cares - the point is he was Au natural. Muscular build, six pack abs, fine ass, and an eyebrow raising cock.
I passed to the toilet, smell of stale liqueur assailed my nostrils, said I, "Que onda, Chanuk?" ("What's up, Tarzan?")
Noticing my presence - obviously oblivious to everything before - he smiled with abstract embarrassment, "Hoy, soy un Party Animal!" ("Today, I am the Party Animal!") In which then he croaked out a wolf's howl.
I stood in the indoor outhouse whipped out my dry goods and took a piss. He heard me chuckle and I said, "Todo es bueno." ("It's all good.")
There was a pause of silence - between him and I - I mean there was the sound of my morning piss, you know, but we were quiet in the moment - long embarrassing silence.
"I'm sorry, guedo." He blurted.
"Es no importa." ("It's not important.") I laughed back.
He babbled something unintelligible that ended with that he was sorry. Sorry for what? Being naked? Being drunk? Being drunk and naked? Again I told him that it was no importa but as I finished draining my bladder I heard the door to his room slam shut. Damn! I was going to tap that shit but just took a shower instead and had another dull day.
Posted by LMB at 4:33 PM No comments: Links to this post