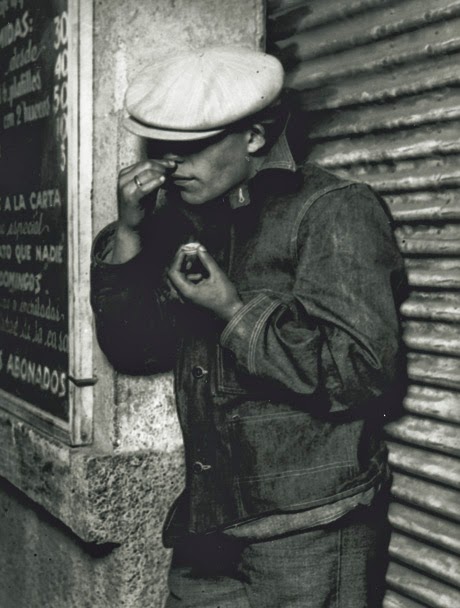 I darted around the chain-link fence which encircled the Rescue Mission - I was there in lieu of visiting an old friend - when I almost ran into a tall, skinny ruggedly handsome man in his mid-twenties. Scruffy and a few days shy of a shave, he wore the hobo uniform of well-worn jeans, plaid shirt, and baseball cap. Obviously he was staying in the camp of tramp's nearby, a ratty encampment of tents and discarded cardboard shacks.Two things I noticed about him was his stunning blue eyes and that he was brandishing a rather sinister looking knife.
As he ran past me, he blurted, "Lookout! That dudes gotta rock!"
Indeed, chasing him was a rather demented looking Asian man in his forties - he was clad in a dingy tank top and shorts - carrying a large stone and bleeding from a slash on his forehead. The Asian man stopped momentarily and lifted the rock to strike me. I raised my palms and stated, "I'm just going home, man. I'm not part of this." The Asian man grunted, his face contorted in fury and continued his chase of the white guy. As I quickly made my way up to the train tracks that lead away from the mission, I heard the white guy say, "That'll teach ya to steal!"
As I returned to my friend Marvin's house, I told myself I need to get out of this stupid, ignorant life of hobo's, thieves, junkies, and the deranged. And I did. I rented a quite pleasant apartment on the other side of the border in Juarez City. Again. In a quiet neighborhood, it was a single room flat with french doors which opened to a tranquil street and in the proximity of downtown. Only $130 a month, so I can't complain.
I took a stroll through the Plaza las Armas at sunset. Long shadows crept over broken masonry and piles of sooty garbage. Vendors cried out for shoe shines, razor blades, taxis. Lovers of both sexes strode laughing and chatting. Rentboys stood with hips cocked under streetlamps and sign posts. Various cha-cha music blasted from a thousand cantinas in a kaleidoscope of neon all under the sad eyes of the ever watching Virgin. After a decade of murder and mayhem, the pulse of life has returned to the city.
The last few days I have been working on my new novel. The book version of this blog entitled Borrowed Flesh. It will be written in the way I always intended - inspired by the muse of the beats using surreal text and cut-up sections. I'm certain it won't sale, but it will be my most personal work.
I am quite content. After a year of disastrous events, its good to sleep in my own bed again. I was really losing it - both physically and mentally. I realize it won't last. Good things never do, only the bad seems to endure. Maybe this time I'm wrong...
Posted by LMB at 4:20 PM