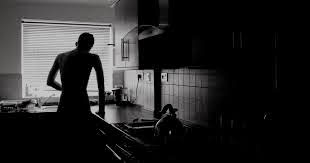 "I trust that none will stretch the seams in putting on the coat, for it may do good service to him who fits."
"This skin, willowy and alabaster in its pigment’s allure, drapes over my shoulders to the sleeves of flesh born to fit." His eyes darted towards the shambling door ajar in the blue entryway, ritualistically slapping the heels of his tattered leather boots in four consecutive movements, then a measured pause in the rhythmic cipher of his feet, then proceeded to drift each foot in a deliberate, dispassionate and timed twirl in four steps apart, as his soles halt in a parallel distance. The man glared down at his abiding movement with absentminded determination, each seemingly aimless placement of his feet resembling the small hubris of a child immersed in freewheeling harmony with the solitude of dismal, stripped formations of trees cascading across barren acres. He was eating a dried stalk of celery, his thin lips moistened by morsels of lukewarm blue cheese that he lightly applied on the celery from a small, plastic vat perched on the center of his groin’s static posture.
I feel malcontent. Inside the intestinal annuls of my digestive system, there was a constant and violent surge, like the ruptured and coarse catacombs of a macabre tyrant’s mausoleum inflicted by seismic tremors perishing its structural fortitude into colorless wisps of ash and dissipating debris, as my fingers would clench desperately between each intermediate bout of trembling emanating from the incomprehensible activity that thrived within my bulbous abdomen.
Posted by LMB at 1:00 AM

Mind Of Mine said...

I have missed this so much