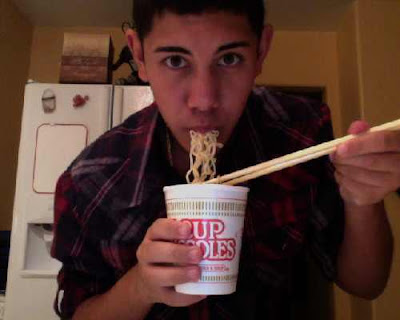 He lives in my neighborhood. You know the type, hangs out in front of the liquor store, bumming smokes, spitting on the sidewalk with another vato or two, doing nothing but dreaming through time. He drops by my place now and again. Mostly when his mother is giving him flack to get his lazy ass out and get a job. A listless loser. But, a sweet kid, too. And so it goes.
He has a girlfriend - a plump little number with the gift of gab who lives with her alcoholic aunt in a shitty, red-brick building over by the dusty warehouses with the occasional cholo shootout. She seems to love him. I'm certain he loves her, too. And so it goes.
I met him a while back coming out of said liquor store - asked for a dollar, said he was hungry. Brought him home, fed him. He likes to lounge on the couch, immobile as a lizard - playing video games or watching movies. He really likes the Bruce Willis and Jackie Chan flicks. Mindless entertainment for one so mindless. Once in a while, we'll sit and talk for hours about stupid shit. He'll sometimes ask to pop in a porn and watch with that frozen, slack, poker face that every straight guy has when watching porn. I blow him when he want to. He asks and seems quite happy to leave it at that. And so it goes.
I gave him the nickname Squirt on account of one afternoon we were on the couch jerking each other off to straight porn and when he came, his semen squirted over his head and splattered the wall. He still laughs about it. I was upset for I had to clean it up later, cursing the virility of a twenty-one year old, cursing my faded years. And so it goes.
Today, I was crossing the street and Squirt and his girlfriend were walking in the opposite direction towards me. He caught my eye and guiltily escorted her quickly in another direction into a shop. The meaning is quite clear, my friend, our worlds can never cross.
And so it goes.
Posted by LMB at 3:36 AM