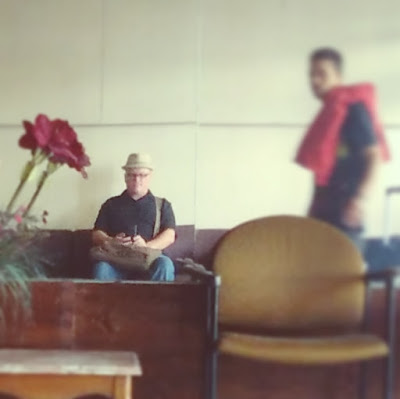 I had luck locating a furnished room to rent for the month between Madero and Revolucion on 5th street downtown. A modern and clean joint for $260 a month. Packing my shit, I left the San Jorge and hopped a cab to settle in.
It was the 4th of July weekend and I was leery of finding a spot on account of the massive influx of Americans clogging the streets to celebrate Independence Day. It worked out in the end. After unpacking and chatting with the kind landlady, I made my way to the Praga Café nearby and sat drinking the best coffee ever. Sat and thought. And thought some more. What the fuck was I doing here? I have actually grown weary of Tijuana and all the diversions it has to offer. Oh shut, how I have become such a recluse. I debated simply booking another flight and flinging myself up to Provo, Utah to await public housing and wither away unnoticed until my old age.
Instead, I began to form plans within plans. Perhaps to remain in TJ and finish that book. Afterwards to rent a place on the beach or continue on to South East Asia. I don’t know yet. I feel so lost.
The following day, after showering and getting dressed, I took a clunky bus out to playas and walked around. The sea was so pleasant and the sounds so soothing. Funny note: I stopped to munch on some fish tacos when this old hag plopped next to me and attempted to seduce me with her feminine whiles. I dropped the fag bomb which ruined her entire scheme. She mentioned that she used to know another American, another writer who lived on the beach named Robert Smallwood. “Yeah, I used to know him.” I said. She then went into a passionate soliloquy on her undying love for this man. I stated I hadn’t seen him for years, last I saw he was in Cuba or Spain. She continued blathering about him and I couldn’t eat my tacos fast enough. I paid and left.
At the Praga, I came into acquaintance with an American getting teeth work. An independent film-maker named Randy Atkins. He did a film titled ARSENAL OF HYPOCRISY, made a name for himself. We both sat and chatted. Talked of film and writing. Seemed a good guy.
I excused myself and returned to my room. I lay in the darkness mired in indecision and anxiety. I really have no idea what I want. If I want anything at all.
The following morning, I ran into Randy once again and we both toured around the beach talking of interests and such. I really put on a pleasant mask, because my only desire was to lay down and stop breathing. It has become that dire. I really am done with this whole mortal coil thing.
A ver.
Posted by LMB at 6:59 PM