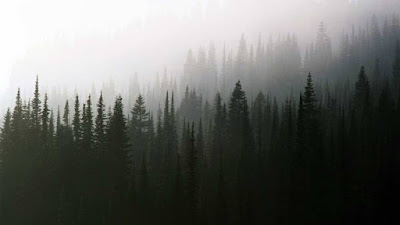 Black winds howl down off fir tree covered mountains leaving the rustic town bitter and cold. Enormous crows swarm and swoop in the pristine indigo sky as weary and beat Indians shuffle in tattered clothes past cafés and restaurants occupied with clean and well-dressed white man. They smile whitened teeth and sip expensive wines as an intoxicated Native obsequiously shuffles up clothes grimy and dusky with soot, he extends a withered brown hand asking for a handout before warned away by the asshole barista with the beard and the man-bun.
Met a hip Native by the moniker Elston. Primarily, we sit on some sunny stoop smoking and talking. Perhaps talking too much. I enjoy silence. The echoing voices within my head living and re-living nostalgic memories over and over again. Shit…I can sit idle for eight hours straight staring at the tip of my shoe and I’d be utterly content. It takes up Time.
Long days pass waiting. And it’s cold. Always the cold. More so from the for mentioned gusts blowing down from those picturesque mountains, goddamit. I sit catatonic in a park under swaying trees as the local hobos bask in the sun rolling cigarettes and sipping liquor from brown paper bags – it is so maudlin. I have witnessed this scenario a million times and I venture I will see it a million again before I give up the ghost.
Time spent waiting. Waiting waiting waiting for what exactly? I have no idea. I am out of fucking options. Too many let downs and dead ends over the past few years. I am at the point where I have given up. Is this the end? Is this the beginning of a sweet and much sought after death I so welcome with open arms? I surely hope so because quite honestly, I am damn tired of this shit…all of it.
Posted by LMB at 2:32 PM