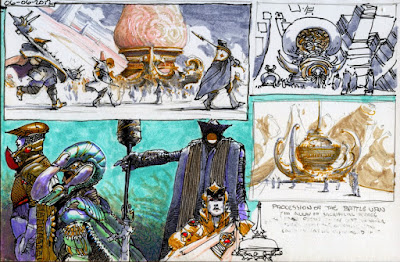 When I set out to write a novel, it is standard issue to brainstorm the general plot. That being said, here is the first of six parts of the science fiction novel I plan to finish after I am through with the Burroughs book. Please keep in mind, it is written primarily as a blueprint and is subject to change drastically once I begin. But, this is the general idea. A far cry from my previous works. I simply wanted to go in a new direction and try something "fun".

The story opens on a television broadcast of a news woman interviewing Edgar Rodriguez, heir to a Texan Oil Tycoon, Jorge Rodriguez. Edgar is twenty-eight: tall, athletic, handsome, and has a witty personality. He graduated in astro-physics at MIT and has spent billions of his inheritance in building the first non-government, commercial rocketship to travel to Mars. He is being interviewed on the landing platform with the rocket behind him out in the New Mexican desert. He states that he is proud to be an American and believes that it is time for our country to lift themselves out of the stagnation of the early 21st century and bring back the spirit of adventurers, inventors, and risk takers of the early past century.

Hours before take-off on this historic event, we find out that Edgar is homosexual as he states his tearful goodbyes to his partner, Kyle Jameson of three years. Make a note to put standard anti-gay situations in the motif of the US military assisting on the base. In addition to Edgar’s father’s dismay on his son’s homosexuality.

Blast off! Edgar soars up into the stratosphere and into outer space. (Reference real accounts from astronauts (Buzz Aldrin, Lance Armstrong) in describing space travel and the orbit of Earth. It must be described with scientific accuracy and heavily use NASA jargon.) Keeping in contact with his base below, Edgar swings around the moon utilizing the catapult effect and begins his long six month journey to Mars. The event is televised live worldwide.

Once out of the moon’s orbit, there is an unexpected meteoroid shower which pummels his ship. Navigation is destroyed, radio arrays are smashed making it impossible to contact Earth and half his oxygen supply is punctured, leaking into space. Glancing out the port hole, he notices he has been knocked off course, the nose of his rocket is pointing directly toward the sun and he is hurtling at it thousands of miles per hour! Unable to alter course, Edgar accepts his fate of burning up in the sun and hunkers down to the long journey toward eventual death.

At the fifth month, tired, bored, and depressed (he bided his time exercising, reading, contemplating suicide - use comical vignettes), Edgar glances out his port hole and notices the amber crescent disc of Venus slowing passing into view. He bursts out in half-crazed laughter as he realizes he won’t be burning up in the sun after all, but in the hot, sulfuric acid infused atmosphere of Venus!

Donning a survival suit and mask, Edgar prepares himself for his decent onto Venus. The rocket buckles and shakes as it plummets through the tumultuous yellow clouds of sulfuric acid. Edgar screams in horror, realizing that this is the end. Suddenly, steam and howling winds surround the rocket as it shoots downward out of the torment of acid clouds and into a dark navy layer below comprised of water. Water!? Edgar finds his rocket screaming down through what seems to be an atmosphere of earthly hurricane-like conditions – dark grey and hellish – raindrops streaking the pitted port hole. The rocket stops buckling violently as Edgar peers out the portal and is now diving rapidly through monumental yet calm and billowing clouds!

Quickly, Edgar pulls a lever which emits a series of parachutes designed to slow the rocketship in its previously intended decent into the Martian atmosphere. The torpedo-like ship rattles violently but slows as Edgar straps on a backpack and decides to parachute toward the surface. Throwing open the outer hatch, Edgar leaps out of the cockpit – he briefly glances the rocket streaking away into an enormous cloud bank. Edgar falls…and falls…and falls…through various layers of clouds, each with highly different pressures. He breaks through the bottom of one and notices a vast, tranquil sea of mist below stretching out into every direction. He yanks the rip cord and drifts down into the foreboding fog.

He falls through the murky darkness for some time when suddenly he is yanked to a violent halt! Through the gloom, he notices that the wires of his chute are tangled in the branches of a gargantuan tree jutting up through an even thicker layer of mist! There is obviously vegetation on Venus! With much effort, he swings to an opposite branch. Cutting the wires loose and removing the pack, he begins to make his climb down to the surface.

Edgar stops to rest on a giant tree branch. Amazed and fatigued, glancing at his watch, he has been descending the same tree for three hours and still has not reached the surface! He looks about at his surroundings. His eyes have adjusted to the murky fog and also noticed that dim yellow light is emitted from the upper third layer of the atmosphere basking everything in an eerie orange, post-dawn glow. He can now see he is in the midst of a massive jungle of colossal trees and foliage jutting up from a seemingly bottomless pit of grey fog.

Suddenly, a bit away, he hears something moving. A beast the size of a Shetland pony but resembling a palpitating, white grub worm on six crab legs and sporting a nasty scorpion-like stinger drops onto the branch stalking him. Behind the thing, two more of the same beasts creep into view. They emit a piercing shriek as they lurk forward to attack. Without any weapons, Edgar turns to run when the first thing springs through the air and lands onto his back. He can feel the hot saliva from the thing dripping on the back of his neck as he is pinned down by powerful claws. Suddenly, he senses intense heat and then smells burning flesh as the thing falls off him. Glancing back, he witnesses the second monster leaping into the air at him, but in mid-air, an almost invisible ray of white light fires from out of the fog and kills the beasts. The last monster screams and charges only to be torched by a second burst of the mysterious heat ray.

Gathering his wits, Edgar rolls onto his back just in time to notice a troop of nineteen men approaching. One is holding a ray gun. He holsters his weapon, but doing so, the others draw swords dangling from their hips. Edgar attempts to communicate with them – thanking them for saving his life. They look on in consternation then babble solemnly to themselves as they check out his odd apparel. Edgar realizes they cannot understand one another. The obvious leader of the troop informs Edgar with hand motions that they will be descending the tree and at the points of their swords, he comes to the conclusion he is going with!

For two days the troop scales down the sides of the tree and then swing from massive branch to massive branch deeper into the jungle. Overnight, they spike hammocks against the trunk of a tree and eat and sleep. Edgar learns the name of the leader of the troop is Thufir, other than that, he knows not where he is being taken.

Eventually, they reach a vast walkway meandering through the branches. It leads toward a massive tree at least five thousand feet in diameter encircled with walkways and balconies. Edgar is amazed at the size and ornate design of the "city". What is more amazing is that the city is populated by thousands of handsome men, he sees no women what so ever. How do they repopulate, he muses as he is led through immense ornate doors and down a great vaulted hall. Down more hallways, Edgar notices no elderly or young children – all men from the ages of late teens to early thirties. The men are dark skinned with black hair carrying facial features of south pacific natives. Their clothing is a kind of retro-futuristic military garb.

Edgar is escorted into a colossal hall and presented to their ruler. On a dias, a young man seemingly in his late teens sits on a massive throne carved from a single jade. His face is hidden behind a jeweled and ornate mask of gold and his body is swathed in colorful robes. On either side of the throne stands a guard of twelve warrior women. Thufir bows and explains to the ruler how Edgar was found. A Major Domo of the ruler approaches Edgar and begins examining his clothes, face, hair, teeth – as if he was cattle for sale…or a slave. The Major Domo babbles to the ruler. Thufir and the ruler chatter a lengthy debate and Edgar is ushered out.

Edgar is escorted to a large room with a small balcony looking out into the jungle. The room is obviously his chambers. Regal and lavishly furnished, Edgar realizes it is a prison none the less...