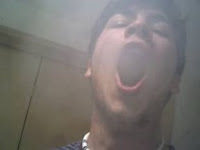 That randy old fruit Father Flanagan - he of Boy's Town - once stated, "There is no such thing as a bad boy." Well, obviously the old bitch never set foot in Tijuana. About 5:30 this morning I was awoken by the resounding pounding of a neighbor at my front door. Staring blurry eyed out into the misty rain drenched dawn was Carlos waiting down in the street. Ugh. I thought I made myself clear that no more money was coming his way...I hissed at him, "I ain't got no money for you - beat it!" He looked wounded and stated that he was not here for cash but just to give my a kiss before going to work. How could I say no to that? Throwing on my pajamas, I sloshed out into the rain and opened the gate letting him in.
Not in my room five minutes and he said he had to go - after asking for some cash. I explained that the Banco de Luis is closed permanently and went to the restroom to swish Listerine into my early morning mouth. As I came out - Carlos gave me a peck and said he had to jet. And poof - he was gone like a thief in the night. Thief is right - worthless motherfucker rolled me for my cellphone. Rage and bile erupted - once just once, I'd like to meet a Mexican National that does not rob gringos blind. And if they say they don't - they are the biggest thieves of all. I say this from experience, dearies.
So, donning my clothes and thinking on my feet - I bolt to the border and the Wal-Mart stateside and purchase another, cancelling out my former phone. Ha! Now the bastard is carrying around a useless piece of plastic. I am glad he is hungry. I am glad he is homeless. I am glad that his life is void of friends and happiness. He is just like me...
I returned to Mexico, not angry - just disappointed. The human species is a cruel bunch.
Sat in Plaza Santa Cecilia for the next four hours with that old canuck, Chuck and his very handsome young student friend Theodoro - had a pleasant conversation. Took the edge off a shitty morning. After five cups of the best coffee - ever - I bid my adios' and curtailed it to the Cafe Internet on 2nd and Constitucion to pound this shit out when to my thrill and deboggled mind I receive a phone call on my spankin' brand new cell from a ghost of the past - on old fan from the early days of this blog - a handsome lad by the name of Mario L. - ah, Mario...finally to meet the Jack Kerouac to my William Burroughs. Mario's writing I have always admired - genius acid-based poetry . He stated that he was a few blocks away - returning from his studies of mind expansion in the wilds of southern Mexico.
After begining pleasantries and a handshake, we repaired to the Cafe Norteno and drank coffee and nibbled tacos - smoking and laughing and talking of adventures past. Like any good kid, he invited me to smoke weed with him and materialised in a puff of ganja back at my flat. After getting smoothed out on that shit, he took off for appointments and I snuggled down into sleep to dream of horrid images of monstrous sea creatures and Argonauts of fiery ships.
Woke up several hours later, showered and hit the Zone. Not five minutes in Bar Villa Garcia and I run into Saul - my beloved friend Saul. This day was just getting better and better. The both of us decided to bar hop and got tore up from the floor up, cabrone!
Stopping at my lair - I whipped out the mota that Mario so graciously left me and the two of us were Lucy in the Sky...with diamonds. Saul and I sat on my bed - toking and suffering from a bad case of laughing jags. It being cold and late, Saul decided to kick it for the night at my pad. Tongues probed, fingers poked, and erections were exposed. Saul always was proud of his very long penis and had no qualms of using it. Clothes thrown around the room. Hair is pulled, sweat is licked off of writhing thrusting bodies. Slap-slap-slap-slap went the sound of his brown hips smacking my white and tenders. We fucked on the floor in the rickety wooden chair and came up with the nastiest of positions. Saul talks filthy too me in espanol as he devours my soul. I am seeing stars as that boy rams it home. Squirt! Squirt! Squirt! Our racket echoes on the dirty blue walls of my cheap room as we both moan out in orgasms. Oh shit! Aye caray!
Beaten, bruised and covered in sweat and semen, sheets on the floor and soiled, Saul and I lay there entwined like two snakes - afterwards we shared a Faro cigarette. Showered and went downstairs for some well worked eats. The taco shop on 5th and Martinez was teeming with life. A life that had been squelched in the States and one that will never resurface again.
The States is old and evil. The evil has always been there. Before the settlers, before the Indians. It's been there...waiting.
Posted by LMB at 10:49 AM