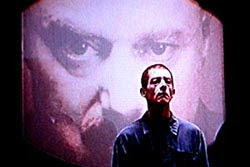 For whom, it suddenly occurred to him to wonder, was he writing this diary? For the future, for the unborn? For the first time the magnitude of what he had undertaken came home to him. How could you communicate with the future? It was of its nature impossible. Either the future would resemble the present in which case it would not listen to him, or it would be different from it, and his predicament would be meaningless. - Winston Smith, from Orwell's 1984
Posted by LMB at 11:57 PM